You are here: Cyborg5 Home > CY's Entertainment News Blog > “Emergence” Might Emerge On Top of a Overdone Premise 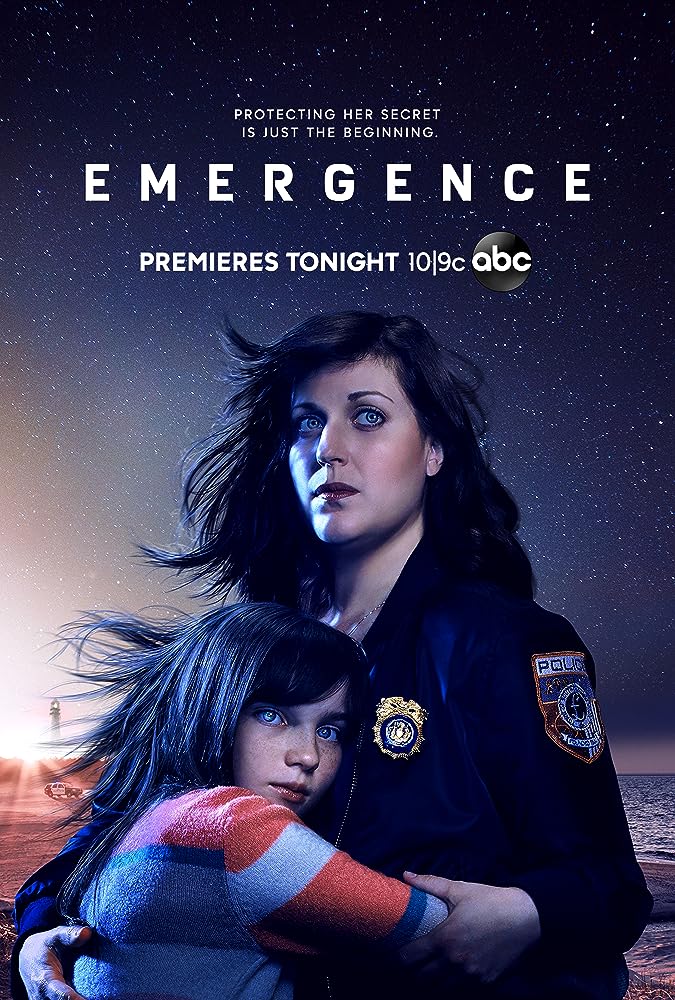 Last January I wrote a review of the new Fox series “The Passage” in which yet another child with some sort of mysterious ability to save the world is on the run from mysterious bad guys and being is protected by a hero.

Can a Young Girl Save the World? Better Question Why Is This Show Called “The Passage”?

Although I initially gave it a rating of “I’m Watching” I actually gave up after about three episodes and the series was canceled at the end of its first season. I mentioned that it’s been done over and over again in series such as “Heroes“, “Touch“, 2002 TV miniseries “Taken“, and others. ABC’s new thriller “Emergence” is the latest attempt to try this overdone premise.

Our hero this time is small town police chief Jo Evans played by Allison Tolman. She recently played in NBC series “Good Girls” but I remember most from her 2014 season role in “Fargo” where she also played a police officer. A small plane crashes on the beach just outside of town and she discovers a young girl on the beach. She is about 10 years old and is unharmed. The girl has amnesia and doesn’t know who she is or if she was even on the plane.

A series of mysterious events follow which include strange electrical disturbances somehow related to the girl. Agents of the NTSB try to interview the girl in the hospital that she’s being checked out but it turns out they are not really from the NTSB. The FAA and NTSB clear the crash site of debris in 24 hours which of course is unheard of. We also have an investigative reporter who shows up with all sorts of strange conspiracy theories. At one point the girl is kidnapped by some mysterious people. I won’t spoil what happens after that but the story continues to be creepy throughout.

The young girl, who is given the name “Piper” because she doesn’t remember her real name, is played by Alexa Swinton. Her only notable previous performance was 12 episodes as Eva Rhodes in “Billions“. We also have Jo’s daughter Mia who appears to be about 13. She is played by Ashley Aufderheide who had previously been seen as a younger version of Tulip on “Preacher” in 2016. Living with them is Jo’s father Ed played by veteran character actor Clancy Brown. We also get to meet Jo’s ex-husband Mia’s father Alex played by Donald Faison who is most remembered for his role as Dr. Christopher Turk on the 2001 comedy “Scrubs“.

Jo takes the girl Piper into her home rather than turning her over to child protective services because there are all of these strange occurrences surrounding the kid. Her ex-husband Alex gets sucked into helping them protect the child. Friendship develops between Piper and daughter Mia.

The story moves at a good pace. There’s lots of action and the performances are up to par. The problem is with any of these “Something weird is going on and there’s a big conspiracy behind it all” is that you don’t know until late in the season (if that quickly) if any of this suspense is going to pay off. I guess I’m a eternal optimist when it comes to shows like this. I hope this one really goes somewhere. There’s something compelling about the series. So I’m giving it a cautious rating of “I’m Watching“. But keep in mind that’s what I gave to “The Passage” and it fell apart after a couple of episodes and was ultimately canceled. So travel at your own risk.