You are here: Cyborg5 Home > CY's Entertainment News Blog > “Devs” is a Creepy Reflection on the Nature of Reality. 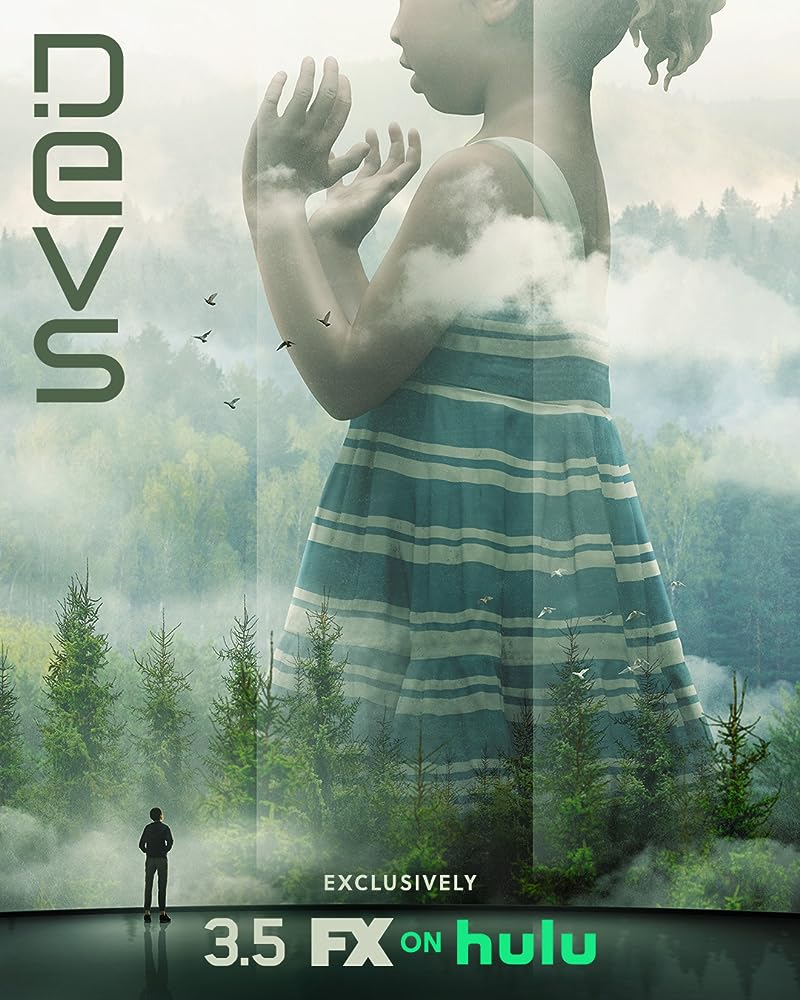 A new sci-fi thriller called “Devs” is available on Hulu. This eight part miniseries is released under the branding of “FX on Hulu” however the series doesn’t appear to be available on FX network at least as of yet. Nick Offerman plays a billionaire genius Forest who runs a computer company that has made major breakthroughs in quantum computing. If you’ve not heard of quantum computing it’s a new type of computer processor that takes advantage of some of the bizarre properties of quantum mechanics. Pundits currently claim that it has the potential to create the most powerful computers we’ve ever seen. It could be a disruptive technology that could unlock any current encryption techniques rendering all computer security obsolete. In real life quantum computing has yet to deliver on its promises but in this series it has delivered way beyond expectations.

The story follows Lily Chan played by Sonoya Mizuno works for a computer company called Amaya along with her boyfriend Sergei. Sergei gets promoted to the company’s top-secret division known as “Devs” but disappears the next day. She goes on a quest to uncover what really happened to him and to try to figure out what’s really going on in the company she works for.

The entire show has a very creepy feel to it. The Amaya company campus is in a wooded area featuring a giant 60 foot statue that looks like a two-year-old girl dressed in a dress. It sort of looks like a giant baby doll. No explanation is given why they have this bizarre monument. We get lots of creepy looking shots of this figure towering above the trees. The soundtrack that runs continuously beneath the show also adds a very creepy feeling to the entire thing.

At this point I will just say that after 3 episodes I’m really enjoying it and giving it a strong rating of “I like it“. It is being described as a miniseries of 8 episodes so don’t expect a second season. If I’m going to continue to talk more about it I really need to get into some spoilers. If you read on, I don’t think it will ruin your enjoyment of the show but some people are especially sensitive to any spoilers so if that’s you… stop reading now and go watch the show.

In the opening episode, Sergei is taken on a tour of the Devs facility by CEO Forrest played by Nick Offerman. It is housed in a completely separate building on the Amaya campus. A giant quantum supercomputer is housed in a vacuum sealed building that hovers inside the building using magnetic levitation. The entire thing is completely sealed from the outside world. Sergei is invited to sit down at a workstation, look at the code they are developing and then he will realize what the Devs project is all about. After several minutes of staring at the screen he suddenly jumps from his seat, runs into the restroom, and vomits violently.

We don’t have to wait long to find out what disturbed him so much. Forest explains to him that indeed this quantum computer has proven that the entire universe is deterministic. Every event in the world is the inevitable consequence of chemistry and physics working on the conditions prior to that moment. Everything is total cause and effect. Essentially free will does not exist. Everything that we do is 100% the inevitable consequence of what has happened prior to that. So this computer has the ability to accurately predict the future as well as run the equations backwards and look into the past.

In subsequent episodes we see them looking in on the crucifixion of Jesus, the burning of Joan of Arc at the stake, and then more personal items such as Marilyn Monroe having sex with her husband Arthur Miller. The latter was done so in violation of company policy and earns the programmers a reprimand. One of the female scientists Katie played by Alison Pill bemoans “Why do male techs always feel the need to caricature themselves? Step one: Create a new technology that reinvents the nature of human existence. Step two: Use it for porn.” Personally I would’ve gone for Marilyn and JFK.

One of the other consequences of the revelation that the universe is completely out of our control means that the enigmatic CEO feels no sense of guilt over anything. If one is not responsible for one’s own actions then one can do whatever they want because that choice is not theirs. It is inevitable.

The main part of the story is Lily trying to uncover Sergei’s disappearance. She is shown a video of him committing suicide but she doesn’t believe it’s real. She comes to discover that he is in fact an industrial spy for Russia. She had no idea. This furthers her feelings that everything isn’t what it seems to be. I’ve only seen the first 3 out of 8 episodes sort remains to be seen how deep the conspiracy goes or where the story will turn after this.

The questions raised by this strange technology and the bizarre revelation that the universe is not what it seems to be along with the mystery of the boyfriend spy and a hidden agenda of the company make this very compelling viewing. As stated before it gets a rating of “I like it” and if you like creepy technology shows sort of like Black Mirror then I highly recommend it.